A cadre of design firms, specialty subcontractors and related project partners paired with McCarthy Building Companies to transform the east end of Washington University in St. Louis’ Danforth Campus with a common vision and purpose of equipping instructors, researchers, staff and students for their next ear of academic excellence.

The East End Transformation of the Danforth Campus, also known as Campus Next, has been a two-year, $280 million project that began the day after commencement ceremonies in May 2017 and is reaching substantial completion by mid-May 2019. McCarthy Project Director Ryan Moss said coordination of complex details and phasing differentiates this project form many others. The East End Transformation represents the largest capital project ever undertaken on the Danforth Campus.

“This project is segmented into eight components,” said Moss. “The last piece of this entire transformation is McKelvey Hall. We didn’t break ground on that project until October 2018, so it will be completed in 2020.”

“The University’s vision was to complete all of these projects as one master project within its master plan rather than taking on each individual building one at a time,” said Moss. “University Architect Jamie Koker did a phenomenal job orchestrating this vision. McCarthy is honored to partner with him and with the University.” 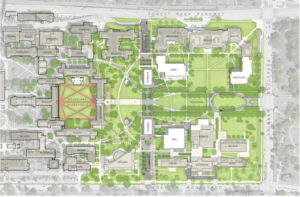 During Summer 2017, when the project’s mass excavations were occurring in preparation for the series of new builds, McCarthy was directing more than 1,200 dump trucks daily. “This equates to one dump truck leaving campus every 60 seconds,” said Moss. “Negotiating that amount of heavy vehicular traffic through an active campus – with students, staff and the public walking in front of those entrances – was a big challenge. Two flaggers from Castle Contracting played a critical role in this because they were the face of the project for many students and faculty who passed the project daily. We refer to these individuals as our rock stars.”

When the harsh conditions of Winter 2019 hit, McCarthy elected to erect a large outdoor tent – 300 feet long by 80 feet wide – so that work to landscape Tisch Park would continue. “We kept the tent up for nearly two months and equipped it with lights and heaters so we could continue work on this portion of the project,” Moss said. 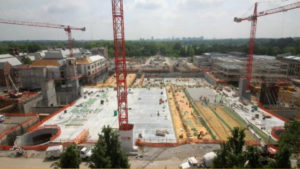 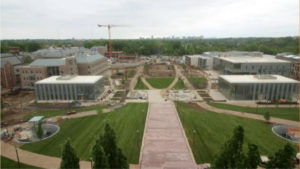 Except for Jubel hall, the buildings constructed as part of the East End Transformation all share structural foundations. Moss said, posing the puzzle of which piece needed to be built next to make the conglomeration of connected structural foundations work. “A lot of it was solved through 3D coordination,” he said. “Five years ago, this critical 3D building technology did not even exist to accomplish this project of this scale in this time frame.”

Sustainability has been a top priority for the University through all facets of the East End Transformation. The University is seeking LEED Gold certification for the new structures. “Efficiency in building design was paramount, as was using sustainable products and materials whenever possible,” Moss said.

Both Sumers Welcome Center (25,500 SF) and the (18,000 SF) Schnuck Pavilion have an all-glass facade from end to end. “The glass on those building is 18 feet tall by four feet wide,” Moss said. “When we first bid out the project, it wasn’t possible to buy glass that large domestically. But by late 2017, we were able to have it fabricated in the U.S. We took some major temporary measures to enclose the buildings before the glass arrived so that construction of the buildings’ interiors could proceed.”

Subsurface exploration for the project was performed by Geotechnology, Inc. Joel Weinhold, regional manager for the firm’s Central Region, said soil borings, lab testing and engineering to assist with foundation design and more were included in Geotechnology’s scope of work. “Excavations on this project reached 40 feet in depth,” said Weinhold. “In comparison, a typical basement excavation may only be 15 feet deep.” He added that the firm worked closely with the structural engineers to provide foundation design for the project. “We performed 51 soil borings to obtain data to assist in the foundation design,” Weinhold said. “The draining system was also a big priority on this project. We analyzed groundwater flow and assisted with overall groundwater and surface water management.” Testing and working with the University’s variety of subsurface limestone and bedrock – each with different capacities and abilities to support structures – was another facet of Geotecnhnology’s Eas End Transformation scope of work.

Speaking of subsurface elements, the 790-space subsurface parking garage has been designed by BNIM and Kieran Timberlake with features that make it unusually adaptive to the future needs of the campus, as the demand for parking single-occupancy vehicles declines. “When visitors enter the parking structure, the first thing they’ll notice is the sheer size of the parking decks,” Moss said. “Typical heights would range from 6 feet 10 inches to 7 feet 2 inches, just tall enough to accommodate a vehicle. At its highest points, the garage’s decks are 18 feet in height.”

BNIM CEO and Principal Steve McDowell said the garage is bathed in natural light, even the two levels below grade. “We’ve been working on the planning and design of this garage for six years,” McDowell said. “The parking structure serves as a gateway to the Brookings hall arch, which is truly the symbolic front door to the historic hilltop campus. Our design challenges included creating a structure that is very gracious and welcoming, one that enhances first impressions of the campus. Being easy to navigate with flat floors so one has a clear view of all the garage on each layer when one is inside the structure was essential.” The dramatic slope of the campus is accommodated by the parking structure, whose slope increases by 12 feet as visitors navigate to the west side.

Perhaps the most unusual feature of the structure is its ability to be converted into classroom or office space as needed in future years. “The University is very forward-thinking,” said McDowell. “They truly focus on how to maintain the greatest value over the long term and be prepared for future learning environments and demands.”

KPFF is the structural engineering firm of record for six of the East End Transformation projects. KPFF Managing Principal John Miller said specific project challenges included engineering the cantilevered corner on the Northwest exterior of Weil Hall. “It’s pretty amazing to see the corner hovering over the welcome court,” said Miller. “At approximately 45 feet by 30 feet, that cantilever is really a spectacular piece of engineering because it has nearly no visible means of support. We have a truss that’s made with very high-strength steel – a tension rod that’s barely visible. It was a creative structural solution,” he added.

Moore Ruble Yudell Design Partner Buzz Yudell said his firm has been working for Washington University in St. Louis for nearly a decade on design projects including Hillman Hall, considered the first project of the East End Transformation. “While that project was happening, the campus was searching for how to transform and further develop the Eas End from what had become parking to become a strategically and academically important zome of the campus. Creating a gateway leading to the hilltop campus all the way from Skinker Boulevard is part of that strategy,” Yudell said. “The goal really started with the academic vision of increasingly supporting more interdisciplinary work. Transitioning from the traditional, Collegiate Gothic architecture of the campus’ core to a more modern look as you move to the east was a principal challenge,” he added. “Landscape is the piece that unites everything.”

Taking a primary and secondary pathways from the historic area of the campus and threading them into the University’s quadrangles – from the engineering district to the North to the Arts on the South and unifying it with the big green that connects to Brookings Hall, the campus’ original building built in 1902 – was led by Michael Vergason Landscape Architects.

MRY’s work included designing Jubel Hall, which houses the McKelvey School of Engineering’s Department of Mechanical Engineering & Material Science. “Designing a blend of materials such as local stone like that used to build the University’s original buildings with transitional, more contemporary materials and integrating a broader use of natural light in the new structures was a focus of our work in emphasizing collaboration and sense of community across this historic campus,” said Yudell. Even the subgrade level of Jubel hall is flooded with natural light, he added. The 80,600-square-foot building features classrooms, faculty offices, 15,600 square feet of research lab spaces and 3,350 square feet of maker space where future engineers can build prototypes and experiment with robotics.

Mackey Mitchell Architects Senior Associate Daniel Schneider partnered with MRY Architects & Planners on design of Jubel Hall. The late Gene Mackey worked extensively on design aspects of the project before his passing in late 2016. The 80,600-square-foot Jubel hall houses the School of Engineering & Applied Science’s Department of Mechanical Engineering & Materials Science. Maker spaces, where students build metal engineering parts with their hands, are designed into Jubel hall. “We designed concrete floors that are 16 inches thick to minimize vibrations,” Schneider said. Themed accent designs are etched into the walls to signify the engineering specialties house therein including a sine wave and fluid mechanics symbols. One notable challenge, said Schneider, was having to shift the design for the garage tunnel connecting Jubel Hall with Uncas A. Whitaker Hall (for Biomedical Engineering) by a foot and a half.

Michael Vergason Landscape Architects Lt. led the design of site and landscape for Tisch Park to integrate planting and paths to weave the entire project together. MVLA Senior Associate and Project Manager Beata Boodell Corcoran worked in tandem with Vergason. “It’s an important central landscape that emphasizes people, not vehicles, ” said Vergason. “Developing a sense of place, building connections between structures on the East End while creating a strong eastward connection to Forest Park was central to our scope of work. Our talented team of multiple design firms integrated a strategy of sustainability that builds on the 1900s plan originally executed by architect Cope & Stewardson. Everything we’ve done builds on the principles of the University’s vision to create a better tie to Forest Park,” he added.

Landscape that allows for an active strong central green and deciduous trees replete with bicycle and pedestrian paths, Corcoran said, encourages students, faculty and staff to linger. An allee of native trees frames the new greenspace focused on Brookings hall. A total of some 17 acres of new landscape has been created via this project. “More than 20,000 cubic yards of soil have been designed for this project to ensure the long-term health of the landscape,” said Corcoran.

Specialty subcontractor Winco Windows supplied windows for Jubel Hall and McKelvey Hall as part of the East End Transformation effort. Winco Owner and Architect Gantt Miller said the company’s collaboration with the University has roots dating back decades. Winco’s expertise in developing and providing the window panning system for the University allows for a clean, tight window installation while preserving and enhancing the look for each structure said Miller.

“The transformation of the East end of the Danforth Campus creates a more connected experience for our community, providing a physical environment designed to enhance the University’s core missions of teaching, learning, discovery, inclusion and impact,” Kolker said. “Implementing this vision would not have been possible without the talent, creativity and dedication of the design teams and contractors.”