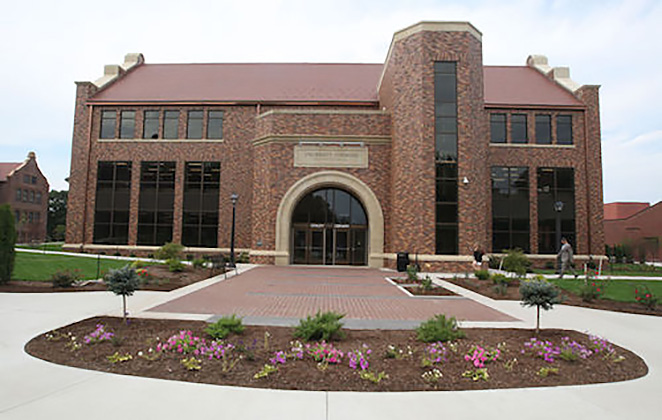 The basics: Millikin University in Decatur, Illinois, opened a new University Commons facility in August 2017. This front door to the campus combines the library and student center functions into one central location, encouraging collaborative learning among students, faculty and administrators. Home to a career center, radio station, dining area and living room, among other features, the facility also houses many of the University’s research and innovation programs for all students at Millikin. The design blends the existing 1976 Staley Library with a large addition to the south side of the building. Elements of the renovated library were incorporated into the more efficient, forward-thinking design of the Commons. An integrated window and metal panel system bridges the new and old buildings.

The glass and systems: IWR North America furnished and installed 87,000 square feet of exterior panels of varying module widths to bridge the new building and the existing building on the east and west elevations. The panels, supplied by Centria, include Formavue FV-600A windows with black spacer glass, horizontal panels at the top of the wall, and vertical panels below. Centria Formawall Dimension series Graphix panels were used on the upper elevations.