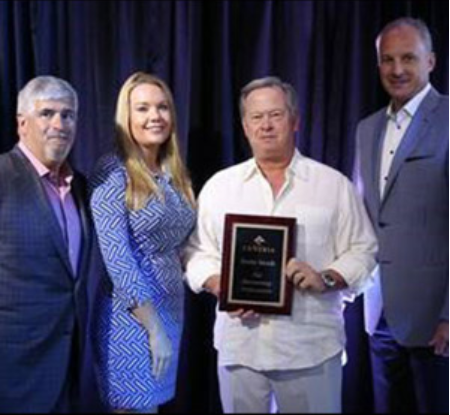 IWR North America, one of the longest-standing building enclosure contractors in the United States, was presented with two 2016-2017 Dealer Project Excellence Awards by CENTRIA, a leading manufacturer of architectural metal wall and roof systems.

IWR accepted the First Place Award under the Arena and Sports Facilities category and the People’s Choice Award as the Project of the Year, both for their work on the Minnesota Vikings Indoor Practice Facility and Headquarters.

“We’re very proud to receive these great honors as they were based on excellence in design, craftsmanship and construction,” said Todd Staley, general manager of IWR North America. “Our nationally recognized team is very grateful for the opportunity to showcase our talents on this project as the People’s Choice Award was voted on by all dealers in attendance, and is the highest honor given.”

All parties involved on the winning project successfully collaborated on the building’s complex geometry with a great deal of accuracy and technical detailing on the custom architectural overlay process, while working on very tight timelines. This allowed the design to move swiftly through the preconstruction process and directly into field installation. IWR installed 135,000 square feet (SF) of CENTRIA Dimension Series Panels with 17,000 SF of flat and striated overlays, 28,000 SF of IW-10A panels, and 1,300 SF of Metalwrap. IWR completed its scope in December 2017.