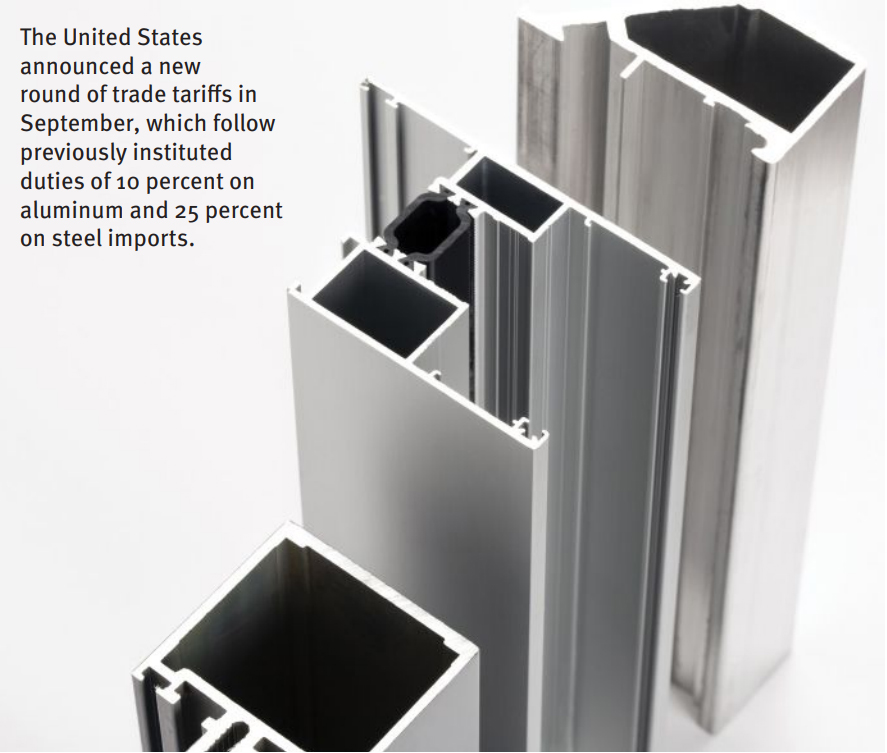 On Sept. 17, the Office of the United States Trade Representative released a list of approximately $200 billion worth of Chinese imports that will be subject to additional tariffs, at the direction of President Donald Trump. The new tariffs took effect on Sept. 24, beginning at 10 percent, and will increase to 25 percent on Jan. 1, 2019.

The list of more than 5,700 products includes float glass and fabricated glass products, such as tempered, laminated and insulating glasses, and mirrors. The list also includes related products, such as opacifiers, colors and similar preparations used in the glass industry.

“We are taking this action today as a result of the Section 301 process that the USTR has been leading for more than 12 months,” said Trump in a statement. “After a thorough study, the USTR concluded that China is engaged in numerous unfair policies and practices relating to United States technology and intellectual property—such as forcing United States companies to transfer technology to Chinese counterparts. These practices plainly constitute a grave threat to the long-term health and prosperity of the United States economy.”

In response, the Chinese government announced on Sept. 18 the addition of $60 billion of U.S. products to its import tariff list, according to a Reuters report.

The announced tariffs follow previously instituted duties on metal products—25 percent on steel imports and 10 percent on aluminum. Aluminum and construction industry officials have been critical of the measures’ intended economic benefit, and uncertain about their ultimate impact on material costs, the supply chain and the health of the overall economy. “We can’t build the case that [the imposition of tariffs] is good for business; it’s not going to build our economy,” says Jeff Henderson, president, Aluminum Extruders Council, aec.org. “It feels like it’s going to be disruptive.”

“Tariffs could be a
threat to the business
cycle growth.”

Connor Lokar, economist, ITR Economics, itreconomics.com, addressed the issue during a presentation at the National Glass Association’s Glazing Executives Forum, held Sept. 12 in conjunction with the 2018 GlassBuild America trade show in Las Vegas. “Tariffs could be a threat to the business cycle growth,” Lokar says. “The idea that we can do this without a cost is just not a reality. Prices are going to increase. … That is really going to be a pressure point for the global economy.”

The tariffs are already adding cost pressures across the domestic glass industry supply chain, according to several exhibitors during GlassBuild America, which took place before the additional duties on products from China were announced.

“There’s a surcharge on all supplier invoices. We have to absorb the cost or pass it along to our customers,” says John Weise, owner, F. Barkow Inc., barkow.com.

“For current customers, we are sticking with pricing promised, but soon we will have to add a surcharge for the tariff. … What it’s really doing is hurting the fabricators. And ultimately the end user takes the cost,” says Heather Monroe, administrative services manager, Machines and Wheels, machinesandwheels.com.

The tariffs, and the cost uncertainty the tariffs create, also affect purchasing decisions and make the bid process more challenging, according to Garret Henson, vice president, sales and marketing, Viracon, viracon.com, speaking during the Supply Chain Panel at the Glazing Executives Forum at GlassBuild America. “The tariffs, and the risk of more tariffs, are impacting short-term supply in the market right now. You might get your glass from North America, but you might buy box spacers from overseas, or interlayers from overseas. … You can walk into someone’s office and an offshore product might be one option on the table, but they are trying to make decisions based on what might happen in three months, six months,” he says.